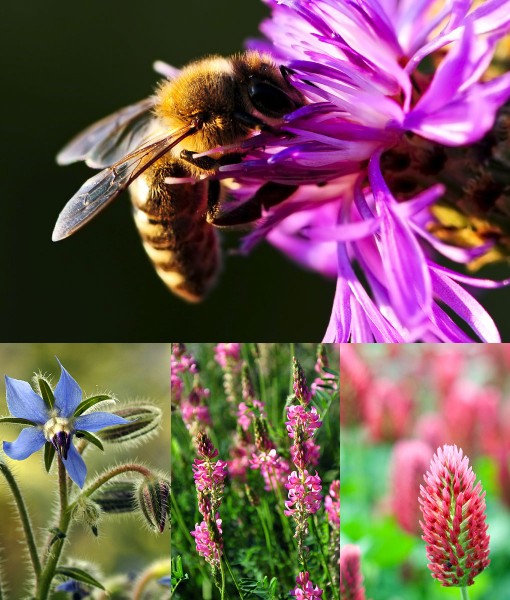 For a complete list of the flower species in this meadow mixture, please open the MIX tab below.

Before the introduction of intensive farming, the use of heavy machinery and herbicide, our farmland was a more diverse landscape with many summer flowering weeds, legumes and specialised local crops. Sainfoin for example was only grown on the Cotswold Hills and Hampshire Downs providing a high protein feed for hard working horses and a rich pollen and nectar source for the foraging Bumblebee.

The flower of Sainfoin is well documented to have attracted bumblebees ‘with great excitement’. Borage is another crop long gone from our working countryside and although white (and to a lesser extent red) clover has made a certain resurgence in use over recent years, it rarely has the opportunity to flower before being cut for silage or grazed by intensively farmed animals. Again, cornfield annuals have all but disappeared from the sterile cereal crops cultivated for the ultimate yields of commercial cereal production.

So these bygone flowers are of our great grandfathers days, our mostly forgotten heritage and maybe the somewhat overlooked actual source of pollen and nectar our struggling bumblebee and butterfly populations are really missing from their modern habitats.

Sow into a well prepared seedbed in spring to late summer.

The following native and agricultural flower species make up 20% of the seeds mixture listed above: